Settlement but still not justice for John Lomax. 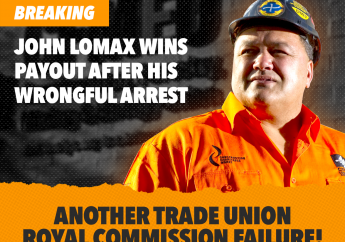 The CFMEU has welcomed news of a settlement between its former Canberra organiser, John Lomax, and the Australian Federal Police, over his wrongful arrest during the Trade Union Royal Commission (TURC).

CFMEU National Construction Secretary Dave Noonan said the TURC taskforce arrested Mr Lomax in an orchestrated blaze of publicity, ensuring that his arrest and the allegations made against him received widespread national and international media attention.

“Mr Lomax’s good name was dragged through the mud by the Australian Federal Police and the TURC taskforce.”

“Coalition ministers took the opportunity to score political points against the CFMEU but when the matter came to court, the AFP produced no evidence and withdrew the charges against Mr Lomax.”

“This was a malicious prosecution brought with no proper legal basis.

“Now we understand that the AFP has insisted that the details and quantum of the settlement be kept secret. What has the AFP got to hide?"

“Australian taxpayers are entitled to know if their funds are being used to cover up unlawful activity by the AFP."

“Malcolm Turnbull needs to explain if damages have been paid, why they’ve been paid and how much has been paid.

This comes on the heels of the stunning about face on blackmail charges pursued against two Victorian Construction union officials, which were dramatically withdrawn this week.

“Yet another malicious prosecution has been overturned, in a further and surely final blow to whatever was left of the laughable reputation of the Trade Union Royal Commission.

“The Turnbull and Abbott Governments have tried to criminalise unions – and they have failed.