Historic win in QLD: Kill a worker, go to jail. 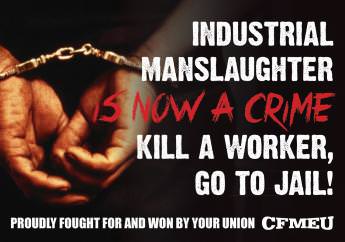 Historic new legislation has finally passed through parliament this afternoon with the introduction of industrial manslaughter laws in Queensland.
The vote was won 43 to 39 with the LNP and One Nation refusing to support the important legislation.
CFMEU Divisional Branch Secretary Michael Ravbar said, “This is a huge win for Queensland workers and everyone who has campaigned to achieve industrial manslaughter legislation for the last 20 years.
“These laws will ensure that employers, who kill or badly injure workers because of their negligence, will finally be held criminally responsible for their actions.
“The fact that the LNP and One Nation did not support the vote proves just how cold hearted and out of touch they are.
“Rather than making employers accountable for their actions by implementing strong laws and tough penalties the LNP and their biggest supporters One Nation continue to oppose them in order to further line the pockets of their big business mates.
“The CFMEU condemns the LNP and One Nation for their cold-hearted betrayal of Queensland workers and the community.
“With a state election not too far away, the LNP and One Nation will surely pay the price at the polls for once again putting workers, families and the community last.
Queenslanders can rest easier knowing that they have a Government who cares for the community and is prepared to do the hard work and introduce tough laws that will protect them.
Queensland now has the strongest workplace health and safety laws in this country. Thank you Annastacia Palaszczuk from all the workers’ in this state.