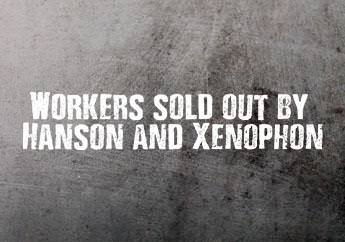 In a betrayal of working Australians, the Senate crossbench has supported the Turnbull Government’s anti-worker Building Code, firmly aligning themselves with the Liberal Party’s war on workers.

In the Senate this afternoon, the crossbenchers voted with the Government against Doug Cameron’s motion to disallow the Building Code.

“The Building Code is an all out attack on job security and working conditions,” CFMEU National Construction Secretary Dave Noonan said.

“It casualises the workforce by promoting the use of labour hire over direct and secure employment, and paves the way for employers to force workers into excessive overtime.

“It’s now clear that One Nation and the Nick Xenophon are in lock step with the Liberal Party on its war on workers’ rights.

“Neither Hanson or Xenophon, despite their rhetoric, are there for workers or the small people. They’ve sided with big corporations, property developers and building companies.”

“The union will continue to fight for job security, safety, and decent hours of work for its members.

“We will be talking to our members and employers in the industry about how we can promote a successful industry that provides safe and secure jobs for construction workers.

“If any construction worker is being pressured by their employer into changing or terminating an agreement to become Code compliant, they should contact the CFMEU.”