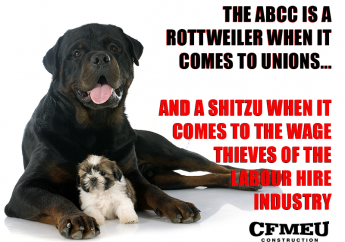 The construction regulator, the ABCC, failed to prosecute a single labour hire company over wage theft despite their own investigation revealing 80% of employers in the sector were in breach of workplace laws.

“The so-called watchdog is a rottweiler when it comes to workers and a shitzu when it comes to the wage thieves of the labour hire industry,” said Dave Noonan, CFMEU National Construction Secretary.

“This is further proof that the ABCC doesn't enforce the law against employers. We have a construction regulator that runs a protection racket for the worst elements in the industry and refuses to investigate clear breaches of workplace laws when they are committed by employers.”

“If this was a union the ABCC would be going after them with all their powers, yet when they uncover multiple employers engaging in widespread illegal behaviour they express their ‘disappointment’. It is absurd.”

“Not only is the ABCC covering up labour wage thieves. They also apparently failed to detect any tax evasion, visa fraud or sham contracting amongst these companies in a sector rife with those crimes.”

“Workers in the construction industry deserve to have the rights protected and the law enforced to ensure employers act appropriately. Instead, they have a regulator that ignores wrongdoing by bosses while going after workers.”

“The fact that the ABCC fails to properly enforce workplace laws in the labour hire sector shows they are a failed regulator that is completely unfit for purpose.”