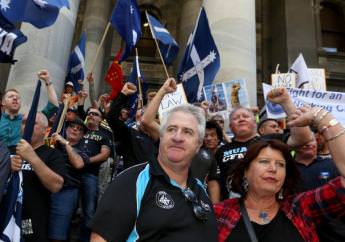 The Construction Forestry Mining and Energy Union will provide evidence at the Coronial Inquest in to the death of Jorge Castillo-Riffo on the New Royal Adelaide Hospital site in November 2014.

The Union’s National Secretary, Dave Noonan, said the union will make submissions, and State Secretary Aaron Cartledge will give evidence before the Inquest, which began in Adelaide today.

Jorge Castillo-Riffo was employed by Structural Systems. The head contractor was a Leighton/Hansen Yuncken joint venture.

Jorge’s partner Pam Gurner-Hall since called for a Coronial Inquest, and the union supported her.

Since Jorge’s death, another construction worker was killed in a scissor lift accident at the same site.

“Construction is one of the most dangerous industries in the country, and construction workers deserve to come home to their families at the end of the day,” Dave Noonan said.

“Safety on construction sites is union business. When unions are constrained, workers’ lives are put at risk. Increasingly, our jobs are being made harder and harder by a system that is putting profits and bosses before people’s lives.

“The union is here to support Pam, to state the facts of the case before the Coroner, and to seek changes that will help stop this happening again.”

Today, the Inquest heard from Pam Gurner-Hall, and inspected the site of the fatality.