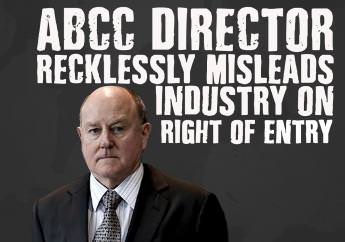 The Turnbull Government has been dealt a major blow in the Federal Court today after the head of its building industry watchdog, Nigel Hadgkiss admitted breaching the legislation he is meant to enforce.

Hadgkiss, the head of the Australian Building and Construction Commission, admitted to a reckless contravention of section 503 of the Fair Work Act in relation to the ABCC’s publication of incorrect information about right of entry rules. The admission was made in an Agreed Statement of Facts handed to the Federal Court in Sydney this morning.

“Nigel Hadgkiss has admitted that his conduct was reckless. We believe the result of that recklessness is that the industry was misled on a key issue affecting workers’ rights,” CFMEU National Construction Secretary Dave Noonan said.

“He has taken great care to bring multiple prosecutions against unions and workers over right of entry breaches, but has failed to conduct himself with reasonable care in relation to these same laws, and in particular those parts of the laws which extend some benefit or protection to workers.

“Mr Hadgkiss’s position as a regulator is compromised and untenable, and he should resign immediately,’ Mr Noonan said.

Under current right of entry rules in the Fair Work Act, there is a provision that lunch rooms are to be the default location for union officials to conduct meetings with workers, should the employer and union official not agree to a suitable location.

The laws are important as workers could be intimidated by being forced to hold discussions with their union representative in clear view of their employer. The current law has been in place since January 2014.

For over two years, from 2014 until the CFMEU complained to the ABCC in 2016, multiple ABCC publications on right of entry laws did not accurately describe this provision, and incorrectly asserted that union officials had to comply with the employer’s wishes on the location of meetings.

While the ABCC had ensured the correct legal position was known internally to its own staff, it disseminated incorrect information to the public and across the industry.

According to internal ABCC emails, Hadgkiss had insisted that corrections to ABCC publications were to be ‘canned’ because the incoming Coalition Government had indicated that it would reverse the laws - which remain in place two years later. According to the emails Hadgkiss said he was extremely comfortable ‘handling’ the matter in Senate Estimates or the media.