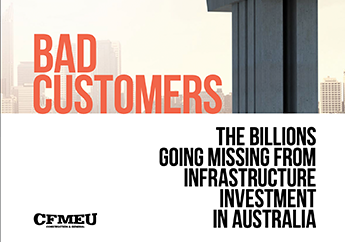 New independent economic research shows a lack of expertise has seen Australian governments waste $10.8 billion in the last ten years, with warnings of a further $5 billion set to be wasted in the next several years through appalling management of infrastructure projects.

The analysis by Equity Economics finds projects such as Sydney’s Light Rail, Victoria’s Regional Fast Rail and the new Royal Adelaide Hospital have run significantly over budget with substantial delays and quality issues as a direct result of state, territory and Commonwealth Governments not retaining adequate expertise in the procurement of infrastructure projects.

This research follows earlier work which revealed that Australia’s apartment building and construction crisis will cost $6.2 billion in remediation and associated costs.

Together, this research shows the multi-billion consequences of decades of government outsourcing and deregulation.

“When it comes to delivering infrastructure, Australian governments have become bad customers, and sadly this has often hurt workers.

“We have tens of billions of dollars going to waste because of a deregulation-at-all-cost agenda. This has resulted in burgeoning corporate profits, compromised worker and community safety,” Mr Noonan said.

“The Federal government’s only answer is to silence the whistle-blowers by putting even more power in the hands of the major construction companies.

“The Ensuring Integrity Legislation is a sham which doesn’t address any of the big failures in construction. All it does is stop sunlight being shone on them,” Mr Noonan said.

There is an estimated $288 billion in Australia’s infrastructure pipeline over the coming decade.

Over the past decade State, Territory and Commonwealth governments have funded $315 billion in infrastructure projects, with another $110bn due to be allocated over the next three years.

This builds on other CFMEU-commissioned research which showed Australia’s building and construction crisis will cost $6.2 billion in remediation costs, with 3,460 apartment buildings across Australia found to contain defective, non-compliant combustible cladding.

This is a direct result of state, territory and Commonwealth Governments not retaining adequate expertise in the procurement of infrastructure projects, or in regulating construction.

The $5 billion likely to be wasted over the next three years could deliver: