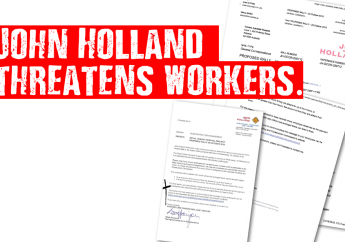 The Chinese owned construction giant, John Holland Group, has been caught out bullying its subcontractors into keeping records on workers who attend political rallies, threatening legal action and fines.

The CFMEU National Assistant Construction Secretary Andrew Sutherland said the company had overstepped the mark, and warned that more of this behaviour would come from employers under the Liberal Government’s partisan attack dog, the ABCC.

In a leaked email to its subcontractors, John Holland Group has warned that workers attending today’s rallies in Adelaide might be participating in “unprotected industrial action”, that may lead to “investigation by the Australian Building and Construction Commission”.

The email urges subcontractors to “keep records” on workers attending the rally.

“It is not illegal in Australia to participate in democracy. Protesting injustice is our right,” Andrew Sutherland said.

“John Holland Group has been caught out trying to intimidate its workforce and punish them for participating in democratic protests.

“This is unacceptable. Attendance at a rally or protest is not industrial action, and they have no right to intimidate the workforce in this way.

The union said the company’s action came after the ABCC last week threatened to fine construction workers up to $42,000 for participating in the national Change the Rules protests on Tuesday.

“This is why Australia needs independent regulators, that will pursue petrol companies and banks with the same rigour they go after unions.”