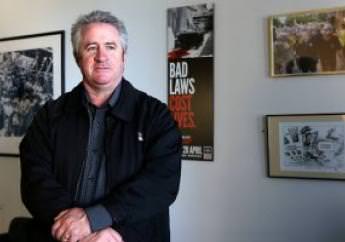 The Federal Court has today ruled that the CFMEU should be fined for holding a peaceful protest on the Perth Children’s Hospital construction site in 2013.

One of the officials fined, CFMEU Construction Division Secretary, Dave Noonan said today that the fines should be a serious concern for every Australian worker.

“This may well be the law, but the law is unjust,” he said

“This case relies on the ABCC laws that unions have been campaigning against for over a decade. These laws and the Turnbull Government’s anti-worker hit squad the ABCC, are unfair and this case highlights exactly that.”

“We have a situation in Australia where a Chinese company engaged to build state Government infrastructure can import asbestos laden building products and threaten to sack workers who want to leave when the alarm is raised.”

“They can tighten the screws on subcontractors through predatory contracting arrangements to the point where they feel they have no way out but suicide.”

“They can build “firewalls” that don’t meet Australian standards and won’t contain fires.”

“The ceiling can collapse, the water pipes can be full of lead, all on a children’s hospital, no less, but God forbid the workers have a peaceful protest!”

“It’s not just union bosses being fined here, we had 53 union members fined over a thousand dollars each for attending this peaceful protest,”he said.

“These workers were rightly concerned about the race to the bottom that predatory contracting practices on the site had started. We held a rally to discuss that, and other concerns bubbling up from the workforce.”