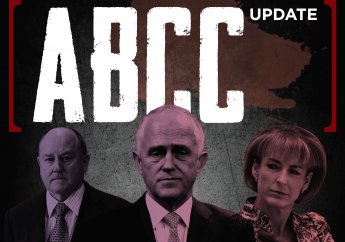 Nigel Hadgkiss, head of the ABCC has been forced to resign after admitting to contravening the Fair Work Act. The very act he is supposed to enforce.

The ABCC published incorrect information regarding “right of entry” for two years. When this issue was brought to Hadgkiss’ attention by his staff he told them to leave the incorrect information where it was. He was reportedly waiting for the Liberal party to pass laws that would make it even harder for union officials to speak to workers.

That never happened, but he kept the misleading information there anyway.

Under right of entry rules in the Fair Work Act, lunch rooms are to be the default location for union officials to conduct meetings with workers.

The laws are important because workers might be intimidated by being forced to hold discussions with their union representative in clear view of their employer. This law has been in place since 2014.

For two years, multiple ABCC publications on right of entry laws incorrectly asserted that union officials had to comply with the employer’s wishes on the location of meetings.

This was extremely misleading to the industry, and led employers to believe they were able to dictate where meetings could be held.

Workplace Relations Minister Michaelia Cash has admitted that she knew about the allegations against Hadgkiss since at least October 2016 - almost a year – meanwhile she pushed through legislation to reintroduce the ABCC and its building code with Hadgkiss at the helm.

How is it acceptable that Michealia Cash could be aware of legal proceedings against her hand-picked regulator based on his deliberate misrepresentation of the law he was charged to uphold, and turn a blind eye?

Yet again this Government demonstrates that there is one rule for them, and another for the rest of us.

The Turnbull Government took the Australian people to a double dissolution election in order to reinstate a botched watchdog headed up by a dodgy Commissioner that they knew about since day one. We won’t forget this at the next election, but in the meantime, there must be an independent inquiry!

The Senate voted AGAIN on Turnbull’s anti-union Building Code on Wednesday 9th August. Senators Xenophon, Hanson and Hinch voted FOR the code, meaning that now all companies wishing to tender for Government work must abide by new anti-union rules in their EBA.

If you don’t do federal government work, the Code doesn’t affect your EBA.

Now that the code is law, your boss may try to take advantage of the confusion by claiming your EBA needs to be ‘Code Compliant’. Don’t be fooled.

Don’t let your boss con you into changing the EBA without the Union.

Your EBA is legally certified. Don’t let the bosses slash your wages and conditions under the cover of Turnbull’s political agenda.