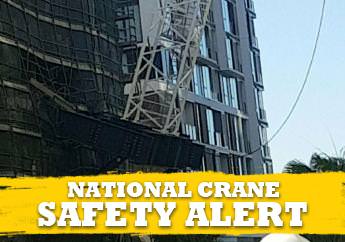 With an unprecedented level of tower crane activity on Sydney’s skyline, a crane incident at the Probuild Constructions Discovery Point residential high-rise development has again focused concerns on safety standards.

Probuild is the main contractor on a 3 tower 20+ story residential apartment complex being built for The Fraser Property Group.

The crane collapse occurred on Sunday 6 August about 9:30 AM at Brodie Spark Drive Wolli Creek when a crane fell from one building onto a second building, injuring three workers. Details are now beginning to emerge regarding the incident which occurred while builders were in the process of erecting the hammerhead type tower crane. A cantilevered grillage had been connected and braced to a lower level slab. Tower sections together with the crane deck had been constructed above the cantilever. The CFMEU understands the workers were in the process of installing the first counterweight when the grillage sheared, causing the crane to topple and hit an adjacent building.

The three crane crew employees were working on the crane when it went over. They rode the crane over and then climbed off the crane onto the roof of the occupied building. They were then evacuated from the roof via a safety cage. The three workers were taken to hospital where they were treated for their injuries, Fortunately the injuries were not life threatening.

Work is underway to stabilise the collapsed crane prior to dismantling and removal from site.

NSW SafeWork, Probuild and the CFMEU are involved in reviewing what happened and why.

The CFMEU is calling for a halt on any further erection of tower cranes on cantilevered grillage until an independent safety audit has been conducted which verifies the safety of the structure.

The CFMEU urges members to contact the union with any concerns about crane safety on their site. Our Tower Crane Pre-erection Inspection Criteria Safety Alert can be found here, along with a printable version of this alert to distribute on site.